Rabies is a rare but serious disease caused by the rabies virus, which can infect the brains of both people and animals. Rabies infects very few humans in the United States and California. Rabies deaths in people are preventable through prompt appropriate medical care. If you think you may have been exposed to rabies, you should contact your health care provider immediately.

Rabies is caused by a virus that is spread through the saliva of infected animals. After infection, the virus may stay dormant in the body from a week to several months before causing symptoms. After the incubation period, the disease presents with fever, cough, nausea, and vomiting; it then rapidly progresses to the symptoms people associate with rabies – hydrophobia (fear of water), difficulty swallowing causing ‘foaming at the mouth’, altered mental state, and eventually coma and death.

2. Rabies is extremely rare in California.

Bats are the most common carriers of rabies in California, with skunks a distant second. Because most bats’ teeth are extremely small and needle-thin, people can be bitten in their sleep and not have any visible wound or mark. For this reason, if you find a bat in your home, you should seek medical advice and have the bat tested, if possible, even in the absence of an obvious bite wound.

According to the California Department of Public Health, in San Mateo County there were 4 rabid bats reported in 2020 (the most current report available), and in 2019 the rabies virus was detected in 3 bats. However, low risk doesn’t mean no risk, and the deadly nature of rabies infection means it’s still prudent to avoid contact with potentially infected animals.

One of the reasons rabies has become so rare is the widespread usage of the rabies vaccine in dogs and cats. Before vaccinations became common in the United States, people would often become exposed to the virus after their dog or cat had come into contact with a rabid wild animal. Because of the vaccine, the last case of a rabid dog in San Mateo County was in 2013. Currently, most exposure cases nation-wide are because of contact with wildlife. In other parts of the world, however, people are still exposed to rabies through contact with domestic animals, especially strays. People can be vaccinated for rabies, too – the modern human rabies vaccine is similar to getting a flu shot (NOT a dozen shots in the abdomen, as is rumored), and can be given before or after exposure to rabies.

4. Wild animals may have other diseases that look like rabies.

If the disease is rare, why do so many people report seeing potentially rabid animals? Many diseases can cause similar symptoms to rabies. A shaking, circling or growling raccoon out in the daytime may be suffering from canine distemper or another kind of encephalitis. While wildlife in California are not likely rabid, animals may be carrying other diseases or parasites, so it’s still important to keep wildlife wild. Do not feed, water, or provide housing for wild animals around your home and do not attempt to approach or handle any wild animals you come across.

It’s always important to remember that low risk is not the same as no risk. Always vaccinate your pets against the rabies virus and keep pets indoors and away from wildlife whenever possible. If you come across an animal acting sick or strangely, contact the Peninsula Humane Society and report the sick or injured animal. If you are bitten by an animal, cleanse the bite thoroughly, see a doctor as soon as possible, and report the bite to the Peninsula Humane Society. Do not attempt to capture the animal. Your doctor will work with the Humane Society to assess your risk and determine your treatment options. 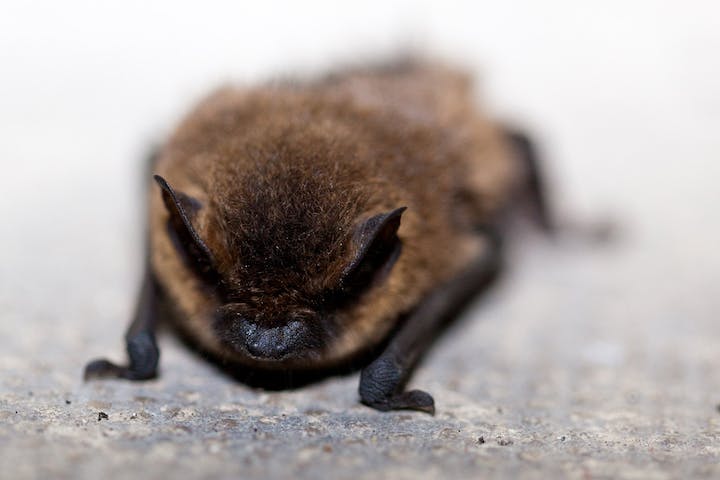 Twenty-five species of bats occur in California.  Most cause no problems, are nocturnal, and rarely seen. However, some species will utilize houses and other man-made structures for roosts or nests. This can lead to an accumulation of droppings, and in certain instances the possibility of rabies transmission to humans.