During the summer months, the District receives numerous calls regarding yellowjackets and paper wasps. These social wasps both have yellow and black markings and are common in San Mateo County, but they have important behavioral differences.

The term “yellowjackets” actually includes a number of wasp species of the genera Vespula and Dolichovespula. They can nest underground or in empty areas such as tree holes or openings in a wall. Their nests are made of wood, mixed with saliva. Unlike bees, they can sting more than once and will also bite. Yellowjacket traps can be purchased at hardware stores, and may reduce the number of foragers around small areas such as porches or picnic tables but the most effective way to reduce their numbers is to remove the nest. Residents of San Mateo County can mark the nest location and call for a service request. A vector control technician will dig up and remove the nest if possible or treat it with a dust-based control product.

In contrast to yellowjackets, paper wasps are in the genus Polistes. They often construct nests under the eaves of houses or in trees. These wasps are much less aggressive than yellowjackets. Residents should start inspecting the outside of their homes for paper wasp nests in the spring, and knock them down with a broom handle or strong spray of water from a nozzle. This is best done in early morning or late evening when the wasps are less active. Residents who are unable to remove their own nests can call the District for assistance. District technicians are not licensed to remove nests from walls or structures.  For removal of these types of nests, you will need to contact a qualified private pest control operator.

Reactions to wasp stings vary among people. Typically there is tenderness and swelling at the sting site, which is intense at first, followed by an ache that may last multiple days. A small percentage of people have a more dangerous allergic reaction, and can develop hives, nausea, and in rare cases life-threatening shock and swelling or the tongue or throat. Another risk from multiple stings is taking in more venom than can be processed by the kidneys, leading to renal failure. To avoid stings, be especially careful walking where yellowjackets are active, as they will respond aggressively if their nest is disturbed. If you are stung, cover your face and run from the area as quickly as possible. 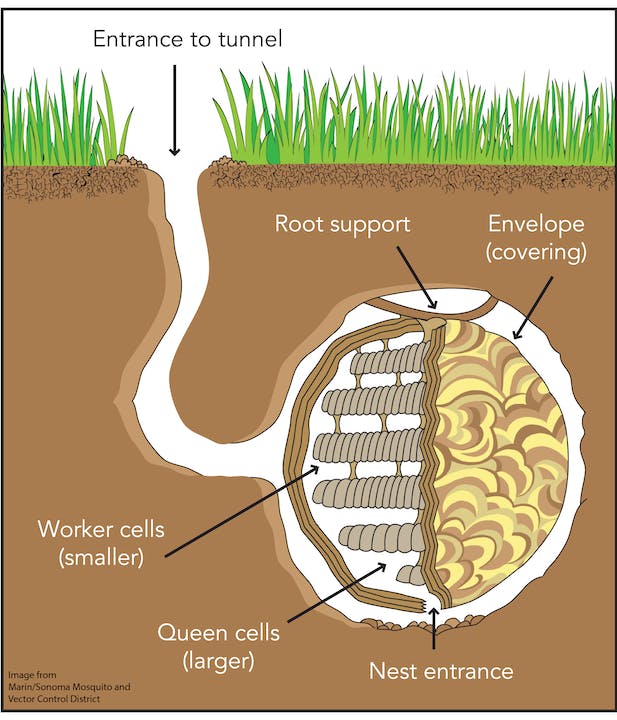 The District provides control for ground nesting yellowjackets when the location of the nest is known. A yellowjacket nest site looks like a small hole in the ground with many yellowjackets flying in and out. Without disturbing the nest, mark its location with a flag or other object so that the technician who comes to treat it will be able to find it.

There are many species of wasps found in San Mateo County. Most species are solitary, non-aggressive, and rarely seen. However, some species may cause annoyance or harm to humans.