In August 2020, several small fires in the Santa Cruz Mountains merged into the SZU Lightning Complex, which ultimately burned 86,509 acres. In San Mateo County, the fire burned 22,755 acres, and is now known as the largest fire in San Mateo history. Laboratory staff are conducting research at Butano State Park, a beautiful old-growth Redwood Forest near Pescadero that was significantly affected. Fire damage, strong winds, and heavy rains have rendered the trees unstable. The park is currently closed to the public due to the inherent safety risks.

With the cooperation and safety guidance of the California State Parks Department, Vector Ecologists Arielle Crews and Tara Roth ventured out into Butano State Park in early January to assess the fire damage to tick habitat and track the emergence of ticks after this large environmental disturbance. Staff measured the burn height on trees, with a specialized tool frequently used by the forest service called a clinometer. The fire damage gradually increased along the 2 mile trail that was surveyed. Other environmental data recorded included sun exposure and dominant vegetation. This information will provide the District with predictive measures on how fire disturbance affects tick populations and ultimately, disease dynamics. The District has limited baseline disease prevalence data from a collecting trip in February of 2019, where 225 adult Ixodes pacificus were collected. Four pools of adult ticks were positive for Borrelia burgdorferi (1.8% MIP) and three were positive for Anaplasma phagocytophilum (1.3% MIP).  Tick surveys at Butano this winter have shown a sharp decline in tick abundance, with 0 ticks collected in December and 25 ticks collected in January. Disease testing is underway. The District will return to the park monthly throughout the year. 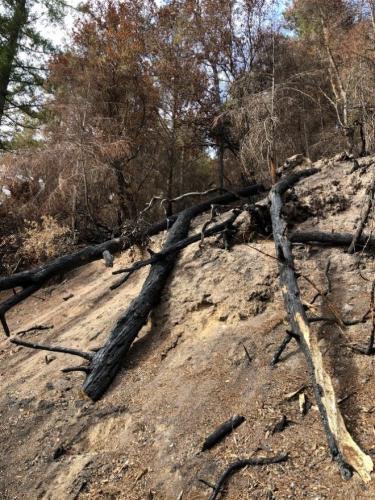 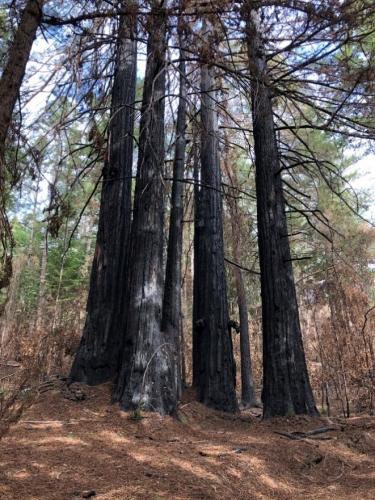