Mosquitoes need only a small amount of water to complete their lifecycle. Even just a bottle cap of water can be a breeding locations for mosquitoes!

Water that collects underneath buildings, in storm drains, vaults and other underground sites are significant sources of mosquito development in San Mateo County. These sources are the preferred habitat of the northern house mosquito (Culex pipiens), which is an efficient vector of West Nile virus. Adults of Culex pipiens are most abundant during the summer. However, in San Mateo County, they can emerge throughout the year, particularly in sheltered underground sources. A significant amount of the District’s mosquito control operations are targeted at mosquitoes developing in underground sources. Learn more about each of these sources below:

Storm drain systems contain “catch basins,” which are the storm water inlets to the system. The basins are designed to catch sediment and have a sump area which is lower than the rest of the drainage system. During winter months, storm drain systems are flushed out regularly by winter rainstorms. However, during the summer, water collects in the basins when residents water their lawns or wash their cars. There are over 80,000 catch basins within the District and each have the potential for producing a vast numbers of mosquito larvae. Therefore the District hires seasonal mosquito control technicians to help treat catch basins during the summer months, applying a refined mineral oil in catch basins from right-hand drive trucks.

Water that collects in utility vaults is another source of mosquito development. District personnel treat these vaults several times a year. The work is done on weekends in the early morning to avoid traffic. Vaults are treated with time-release briquettes that releases a hormone specific to mosquitoes over an extended duration of time. Over 3,000 vaults are treated within the county.

Many of the buildings in San Mateo County are built on slab foundations over bay fill. Over time, the ground beneath these buildings begin to settle and large cavities are created that can collect water from rain or broken pipes. This is known as subsidence. Such cavities can produce enormous numbers of mosquito larvae that can be difficult to reach and treat. The best solution to this problem is filling the gaps around the edges of the foundation with sand and gravel. This prevents adult mosquitoes from entering the site to lay their eggs. Water can also collect in the crawl space under buildings with perimeter foundations. In this case, the installation of a sump pump and diligent upkeep of the plumbing under the building will prevent mosquito issues from arising.

Standing water around homes is a major breeding source for mosquitoes. Fishponds, fountains, birdbaths, neglected swimming pools and hot tubs can all produce mosquitoes under the right conditions.

Mosquitoes can also develop in discarded containers such as flower pots or buckets. As little as an inch of water in the bottom of a can is sufficient for mosquito development. Residents are encouraged to empty any water-holding containers and/ or store them upside down to prevent mosquitoes from developing. Unused swimming and wading pools should be covered and/or drained to prevent breeding. In some cases, the District can assist with drilling holes in old pools and ponds to drain water.

Residents can request assistance from the District for controlling mosquitoes in their own backyards. Many of these sources can be treated without pesticides by simply stocking them with mosquito fish. District staff will deliver fish, at no additional charge, to any private pond within the District. San Mateo County has over 2,300 backyard ponds, pools and fountains that can be treated with fish each year.

Mosquitoes are found in both fresh and saltwater marshes in San Mateo County. However, not all marshes produce mosquitoes. Mosquito larvae are not strong swimmers and they cannot survive in flowing water, deep open water, or in the presence of significant populations of insect predators or fish. The District works with property owners on new wetland restoration projects to encourage design elements that will reduce mosquito development. For existing marshes, the District encourages property owners to maintain as much open water as possible and remove obstructions that hinder water flow. For design guidance to minimize mosquito production in fresh and salt water marshes, contact the District at 650-344-8592.

San Mateo County contains approximately 5,000 acres of salt marsh along the shores of San Francisco Bay and the coastline. The majority of these marshes are along the bay side of the county, adjacent to homes and businesses. Much of the mosquito production occurs in diked, reclaimed marshes and in low areas in the upper marsh area that retain rainwater from winter rains. Four species of mosquitoes are common in these areas: Aedes squamiger, Ae. dorsalis, Culex tarsalis, and Culiseta inornata. The first two, Ae. squamiger and Ae. dorsalis, have the greatest impact on local residents. They commonly travel great distances (up to 25 and 15 miles respectively) inland and vigorously pursue a blood meal in the cities adjacent to these marshes.

Larvae of both Aedes species can reach millions of mosquitoes per acre. Untreated salt marshes can generate billions of adult mosquitoes in a single season. Adults are strong fliers and will bite morning, noon and night, under all conditions. Once emerged, adults of this species travel inland, often following creeks, and then dispersing outward into the surrounding areas.

To prevent the emergence of adult salt marsh mosquitoes, Mosquito Control Technicians inspect marshes throughout the county on a weekly basis. When mosquito larvae are found, they are treated with biorational materials that are specific to mosquitoes and do not harm other organisms. These materials include two kinds of bacteria and a growth regulator that prevents the immature mosquitoes from completing development to the adult stage.

At least six species of mosquitoes develop in freshwater marshes. Each type is specific to a season and type of habitat. Depending on the species, typical larval sources include as forest pools, grassy impounds or dense cattail marshes. Like salt marshes, freshwater marshes are inspected regularly and treated with biorational materials when mosquitoes are present.

During summer months, creeks can serve as a source of mosquito development. Vector control technicians conduct regular inspections of the creeks from May through October, treating isolated pools of standing water as needed. Only those sections of creeks that flow near residences or business are treated. Inspections begin after the water level in the creeks has fallen sufficiently to allow shallow pools of standing water to form (usually in May). They use hand tools to open a walking path through creek vegetation. They will then conduct monthly inspections along this path for the rest of the summer. The materials used in creeks are similar to those used to control mosquito larvae in other sources. These materials are specific to mosquito larvae and do not harm birds, fish, wildlife, or even other insects. They include bacteria and a growth regulator that prevents development of adult mosquitoes. The District does not release mosquito fish in creeks. 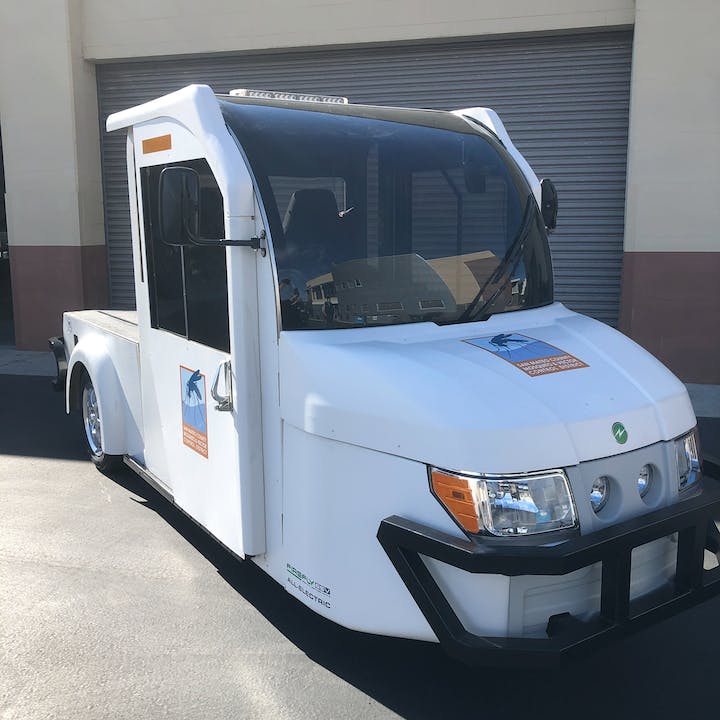 In 2022, the District tested adapting a right-hand drive Firefly ESV (essential services vehicle) provided by ev Transportation Services Inc to conduct storm drain treatments. The vehicle was modified over the next few months and started testing in summer of 2022 for potential use in future summers.