To some people ticks may all look the same, but for Vector Ecologists at the San Mateo County Mosquito and Vector Control District, knowing the small differences among species can help us learn things such as the potential for disease transmission and distribution.  San Mateo County is home to a variety of tick species, many of which residents are unlikely to encounter because of their highly specific habitats.  Lab employees however, have the opportunity to collect ticks directly off wild animals when they are captured for disease surveys, in addition to routine tick flagging.

When identifying ticks, laboratory staff must use microscopes to look for a number of unique features that differ slightly among species.  These key features may also vary depending on the life stage of the ticks (larva, nymph or adult).  Below are a sample of the ticks of San Mateo County in the nymph stage that have been collected and photographed by laboratory staff. 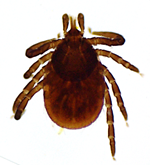 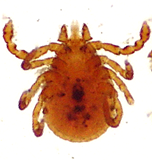 The adult form of these ticks are often found “questing” on grasses or low shrubs near the sides of trails while the nymphs often in leaf litter or on rocks and fallen logs.  This species is considered the main vector of a number of diseases including Lyme Disease and Human Granulocytic Anaplasmosis, the two most common tick-borne diseases in our county.
.

Though originally believed to be nidicolous (spending entire life around its host), some studies have shown that these ticks do exhibit some host seeking behavior.  Though they may not encounter humans often, it is believed they play a role in disease cycles among rodents.  The banana shape of their mouthparts, called palps, is the identifying characteristic of the larval and nymphal stages.

A true nest-dwelling tick, Ixodes angustus prefer to feed on mice, voles, shrews, and rats.  You can often find all life stages feeding simultaneously on the same host.  SMCMVCD staff has collected them off of rodents in select coastal regions and on San Bruno Mountain.  Larvae and nymphs have unique spurs on their palps.

Both Dermacentor occidentalis and Dermacentor variabilis are present in San Mateo County and present throughout the height of summer.  Ticks in this genus can spread diseases such as Rocky Mountain Spotted Fever (RMSF) and Tularemia, although they are rare in this   county.  Short mouthparts and ridges along the back of their abdomen called festoons help identify these species.

A widely distributed tick that feeds almost exclusively on rabbits.  The rabbit tick does not play a prominent role in human disease transmission, but some labs have found individuals infected with Rickettsia rickettsia, the causative agent of RMSF.  Ticks in this genus have no eyes and must rely solely on their other senses when host seeking.