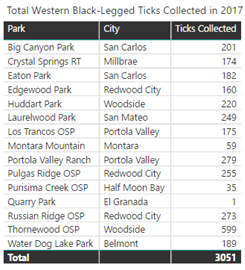 Summary of ticks collected from November 2016 - March 2017. Minimum infection prevalence was only detected in parks where at least 150 ticks were collected.

From January to April of 2017, laboratory staff from the San Mateo County Mosquito and Vector Control District collected ticks from 15 different parks and open spaces around the county.  Ticks were tested for three different disease-causing bacteria using the districts quantitative PCR machine.  Results displayed on the graph are Minimum Infection Rates (MIR).   MIR is an estimated percentage of infected ticks that used when ticks are pooled together before testing to save time and cost.  The following pathogens were tested for in the 2017 tick-born disease surveillance program: Borrelia burgdorferi sensu stricto, Borrelia miyamotoi, and Anaplasma phagocytophilum.

Borrelia burgdorferi sensu stricto (B.b.s.s) is the causative agent for Lyme disease in the United States.  Typical symptoms include fever, headache, fatigue, and a characteristic skin rash called erythema migrans. If left untreated, infection can spread to joints, the heart, and the nervous system.  In previous years, the lab tested for a less specific bacterial group that included other non-disease causing relatives of the bacteria.  Because a more specific test was used this year, the number may appear diminished.

Borrelia miyamotoi (B.m.) is the causative agent of relapsing fever.  This disease is not yet well characterized but it is believed to cause many similar early symptoms to Lyme disease that may resurface multiple times over the course of a few weeks.  At this time, there is no known long-term symptoms that arise if left untreated.

Anaplasma phagocytophilum (A.p) is the causative agent of human granulocytic anaplasmosis (HGA).  Symptoms of HGA also include fever, headache, chills, and muscle aches.  This is the first year the SMCMVCD lab has tested all collected ticks for A.p.

All of the preceding bacteria and transmitted specifically by the Western Black-Legged Tick (Ixodes pacificus).  The diseases they cause are treatable with antibiotics.