Did you know that there are more stinging insects than just wasps and honey bees? Stinging insects are grouped into the family Hymenoptera and are distinguished by having 2 sets of wings, a cinched “wasp waist,” and an ovipositor that has been modified into a stinger. That is about where the comparisons end however. The following article covers the incredible diversity of stinging insects and even points out a couple of the “wanna-bees” that have evolved to mimic their much more aggressive cousins. 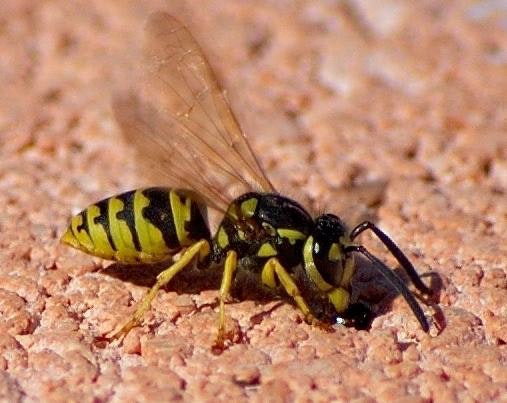 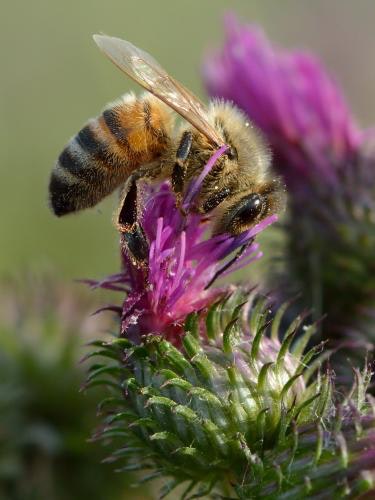 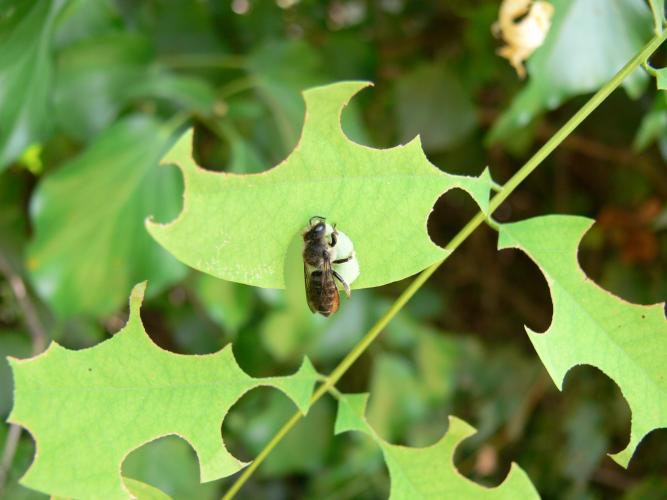 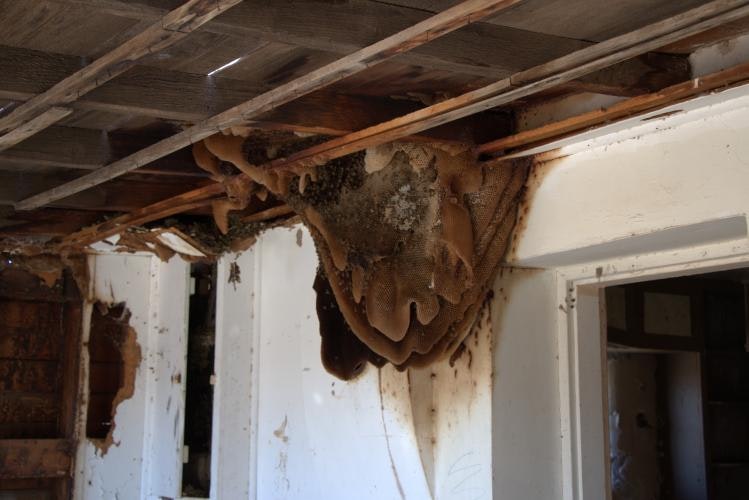 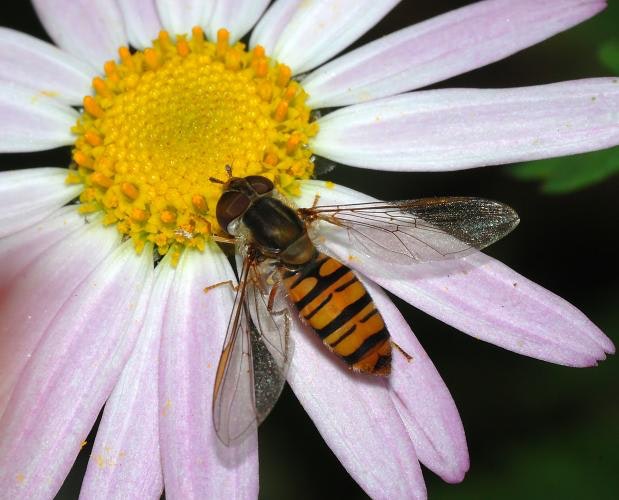 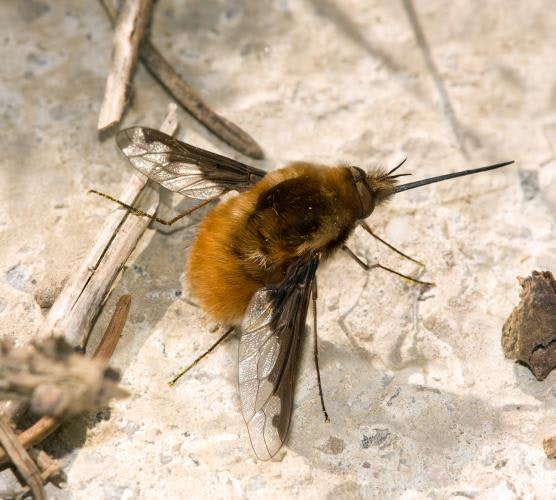 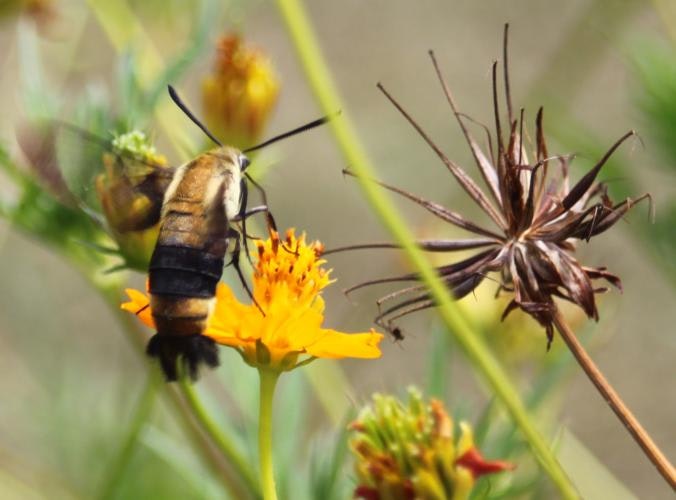 Paper wasps build very distinctive nests with open combs in an umbrella shape that are usually attached by a small stalk (called a petiole) in the eaves of houses. With striking black and yellow coloring, these wasps are often confused with hornets because they have long bodies and legs with an elongated waist that gives them an hourglass like appearance. Unlike yellowjackets and hornets, paper wasps are fairly docile and will only sting when they feel like their nest is being attacked. These wasps typically feed on nectar and other insects and can act as important pollinators.

Yellowjackets (also called “meat bees”) have similar coloring to paper wasps but have significantly shorter legs and a less distinctive waist – making them look more like a bullet than an hourglass. These wasps form large colonies underground and can be very aggressive – stinging repeatedly and biting their foes. They are great predators on insects but also eat a great deal of fruit, flower nectar and tree sap. You may see them attempt to land on your drink or your sandwich to take a bite, but be careful swatting them! Sometimes they decide to strike back!

Gall wasps (also called gallflies) are tiny little wasps that protect their eggs and larvae by parasitizing plants (usually oak trees). The wasp injects a material into the plant and then lays an egg. The plant then forms a gall, much like a tumor, around the wasp larvae where it can develop safely and with all the food it could ever need until it is ready to bore its way out and enter the world again. The type of gall that is created is unique to the wasp so that you can identify the species of wasp just by looking at the gall!

Parasitoid wasps prey on other insects (and sometimes on each other) not by eating them, but by injecting them with eggs. These eggs hatch into larvae and begin to devour their host while it is still alive. They are highly specific about what sort of host they prefer, and you can often guess the wasp species just by seeing their prey. This group is one of the most diverse groups of hymenopterans; they come in a wide variety of colors, shapes and sizes. Parasitoid wasps are considered highly beneficial to humans in that they control agricultural pests like beetles, caterpillars, and flies.

Honey bees are very different than wasps in that they are herbivorous and never feed on other insects. They live in large colonies with thousands of members and create elaborate hives out of wax instead of paper like wasps do. Unlike wasps, honeybees have a barb at the end of their stinger which means that once they sting, their stinger stays in the victim while the bee is basically disemboweled. The venom gland remains attached to the stinger and will continue to inject venom into the victim until the stinger is removed which is why honeybee stings are so painful. Ouch!

It has been said that California is like the Amazon rainforest when it comes to solitary bee diversity. There are at least a thousand species (the yellow-faced bee, the leaf cutting bee, and the digger bee to name a few) and all are excellent pollinators for your garden and 100% native! These bees live alone – often building tunnels where they place a single ball of pollen or pile of leaf cuttings with eggs laid on the surface which they will then bury or cover to keep them safe. These bees prefer California native plants so if you’ve been considering low water options for your garden, consider creating a California landscape! You’ll not only help the environment, you’ll be helping the bees as well!

Africanized honey bees (also called “killer bees”) were first created in Brazil as a hybrid between European and African bees in order to create a breed that would produce more honey but be resistant to disease. Unfortunately, the resultant hybrid was highly aggressive and is considered a pest throughout North and South America. Fortunately, they are sensitive to cold and do not overwinter well, so much of the Northern Hemisphere has been spared.

Syrphid flies (also called hover flies or flower flies) are black and yellow striped just like a wasp but have neither stinger nor venom. These clever flies are even capable of mimicking the way wasps fly and are often confused for their more aggressive brethren. Syrphid flies are important pollinators of flowering plants worldwide and may even specialize on a few plants (such as the slipper orchid in southwest China). They may also prey upon aphids and leafhoppers helping to control these pests.

Like the syrphid fly, bee flies resemble bees and may have evolved that way to avoid predation. They can neither bite, nor sting. These flies are important pollinators and, like the parasitoid wasps above, may help to control pests by laying their eggs near the eggs of other species, usually beetles, wasps, or solitary bees. Once theirs eggs hatch they feed on the eggs and young larvae of the bee fly’s prey. Unlike parasitoid wasps, bee flies are not picky about the host they choose and may unfortunately kill species that are beneficial to humans.

The bumblebee moth (also called the hummingbird moth) looks a lot like a bee but it’s actually in the same family as butterflies! With the furry body, golden and black coloration, and clear wings you could easily mistake this harmless insect for a stinging one! The caterpillars of this moth feed on honeysuckle, cherry, mint and plum but the species is a Midwest and East Coast native and only rarely sighted in southern and Baja California.