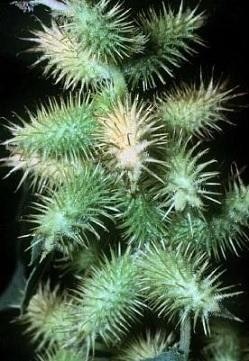 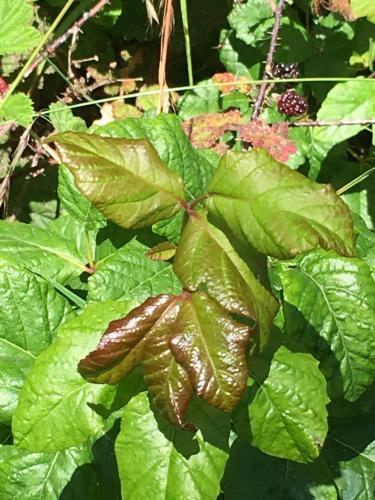 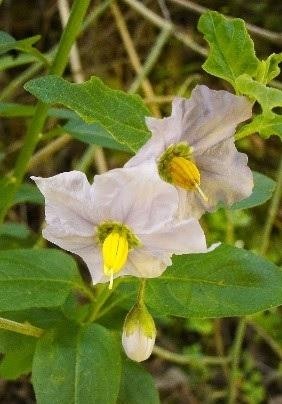 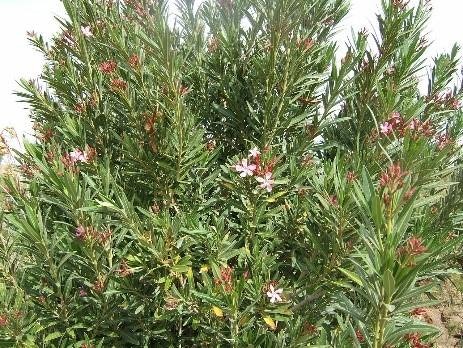 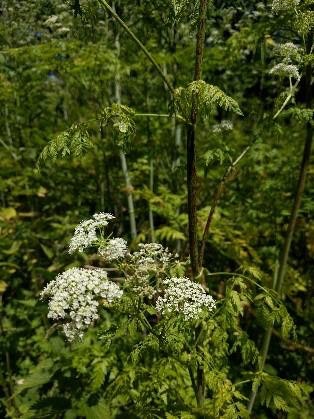 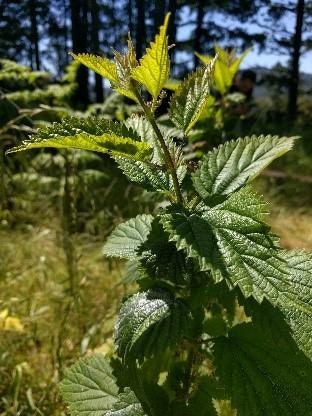 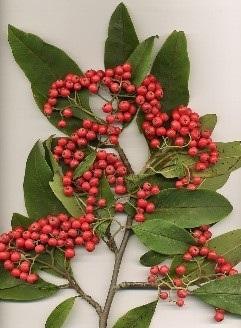 While awe’re mostly concerned with insects, there are many plants that can be harmful as well. Below are seven common species of plants in San Mateo County that we believe are better off left alone.

Poison Oak (Toxicodendron diversilobum) is found all over in chaparral and woodland habitats where it thrives in shade or dappled light. This plant can be a bush or a vine and has long woody stems with scalloped or lobed leaves that are grouped in threes (“Leaves of three, let it be”) with an oily or shiny appearance. These leaves turn bright red toward the end of summer before they drop off leaving just the stems behind. The oil produced by poison oak can cause a severe rash in sensitive people. The rash appears as a red raised splotch that feels extremely itchy. The skin may blister and crack in severe exposures – weeping fluid. To avoid this, if you feel like you could have been exposed to poison oak, make sure you wash thoroughly with soap and water or use a special poison oak soap like Technu. If you have a rash, topical steroids such as Cortisol can help reduce the itching.

Poison hemlock (Conium maculatum) is an invasive herb that is common in a variety of places around the county. It has lacey leaves and small white flowers that look like a parachute or umbrella. The stems of poison hemlock are red or purple splotched which is how you differentiate this plant from wild chervil (or cow parsley). This species produces a toxin called coniine that is HIGHLY poisonous if eaten, damaging the central nervous system and preventing the lungs and diaphragm from working, causing suffocation. Poison hemlock has been used historically in capital punishment and is famous for its role in the death of Socrates.

Stinging Nettle (Urtica dioica) is a native species that lives near water sources in woodland areas. The stems are covered in fine hairs (“urticating hairs”) that act like hypodermic needles, injecting a cocktail of chemicals that are very painful. People who touch the plant feel a stinging sensation followed by a pale rash that may take several hours to disappear. Relief can be found by cooling the site of exposure with cold water or mud or by applying an antihistamine cream. The young leaves of stinging nettle are edible and the plant is often touted for its use as a diuretic although we recommend you consult your doctor before adding it to your diet.

Common cocklebur (Xanthium strumarium) is a native species that flowers in late summer and fall with large bur-like seeds that can be very difficult to remove from fur or clothing. The seeds of the cocklebur are very toxic if consumed in large quantities, particularly to livestock and horses, and can cause weakness, instability while walking, nausea, vomiting, a rapid or weak pulse, and eventually death. The common cocklebur is used in small doses in Chinese medicine to treat nasal and sinus congestion and has also been used to create yellow dyes (xanthos means “yellow” in Greek).

Oleander (Nerium spp.) is an extremely drought-tolerant flowering shrub or small tree typically planted along the edges of freeways and highways. The flowers come in a variety of bright colors and the foliage stays green throughout the year making it an attractive plant for people looking to create water conscious gardens. Despite its charms, oleander is EXTREMELY poisonous and 100g of the leaves is enough to kill an adult horse (although rodents and birds seem to be resistant to the toxins). Symptoms of oleander poisoning include nausea, vomiting, abdominal pain, bloody stool, poor circulation, tremors, seizures, coma, and death. Symptoms will occur very soon after ingestion and medical attention is required immediately.

Blue-witch (Solanum umbelliferum) or White Nightshade (Solanum nodiflorum) are native drought-tolerant vines that grow in chaparral, oak woodlands and conifer forests. Nightshade is commonly used as an ornamental plant for its beautiful purple or white flowers and deer-resistant qualities. The nightshade vine is actually related to potatoes, tomatoes and eggplant. While the native species we have in San Mateo county are not as toxic as the related deadly nightshade (also known as belladonna) this plant contains toxic alkaloids which can be very dangerous if ingested causing nausea, vomiting, abdominal pain, bloody stool, tremors, seizures, coma, and death.

Cotoneaster (Cotoneaster franchetii) is a member of the rose family that is native to Asia, Europe and North America. This plant has white or creamy-white flowers, round bright red berries, and strong woody stems. The cotoneaster is most commonly used in ornamental gardens although it may become invasive if not cared for. The fruit of the cotonester contain cyanide which is very poisonous, and 4 out of 5 poisonings occur in children who are attracted to the bright red berries. Symptoms may occur after only a few minutes and include dizziness, low blood pressure, loss of consciousness, seizures, heart attack and death.

Want to know if a plant you see or are buying is toxic? Consult the CalFlora website at www.calflora.org. If you suspect you or a loved one has eaten a poisonous plant, contact your local poison control center at: 1 (800) 222-1222